Bruno Compagnet and Layla Jean Kerley set off to look for snow on the Slovenian peaks. A timeless excursion in the splendid setting of the Julian Alps. 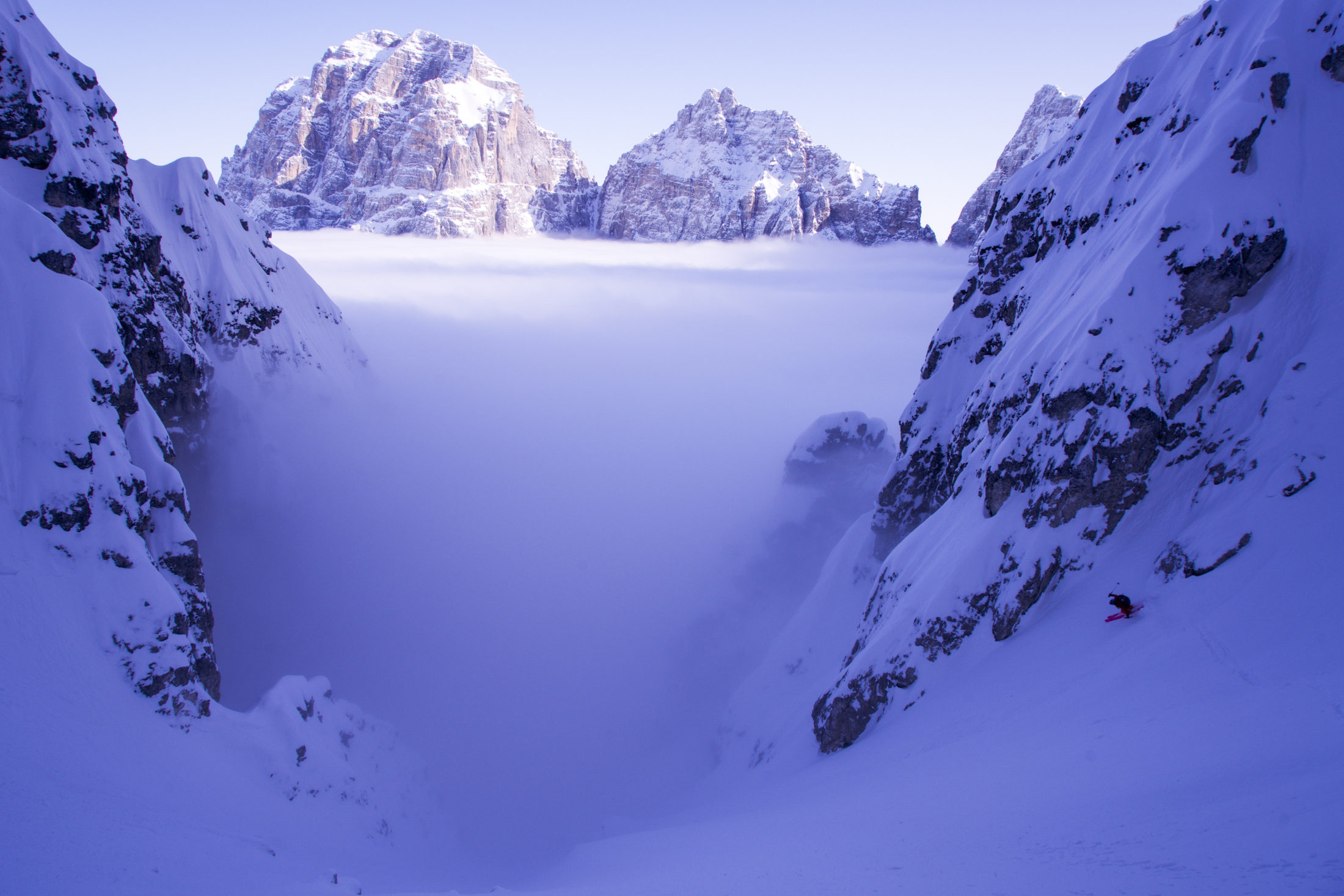 In the depths of winter, somewhat weary in spirit because there’s no snow – a kind of depression that’s fairly widespread nowadays among winter sports enthusiasts – we decide to spend a few days at Sella Nevea, a resort on the edge of the Julian Alps.

Once there, we park our van in the car park of the Hotel Grand Juliana. A picturesque establishment that used to be booked solid. It was high season, yet we were almost the only diners in the restaurant. For decades, the hotel had steadily set its face against moving with the times. It had begun to slide into disrepair and was heading for inevitable demolition. 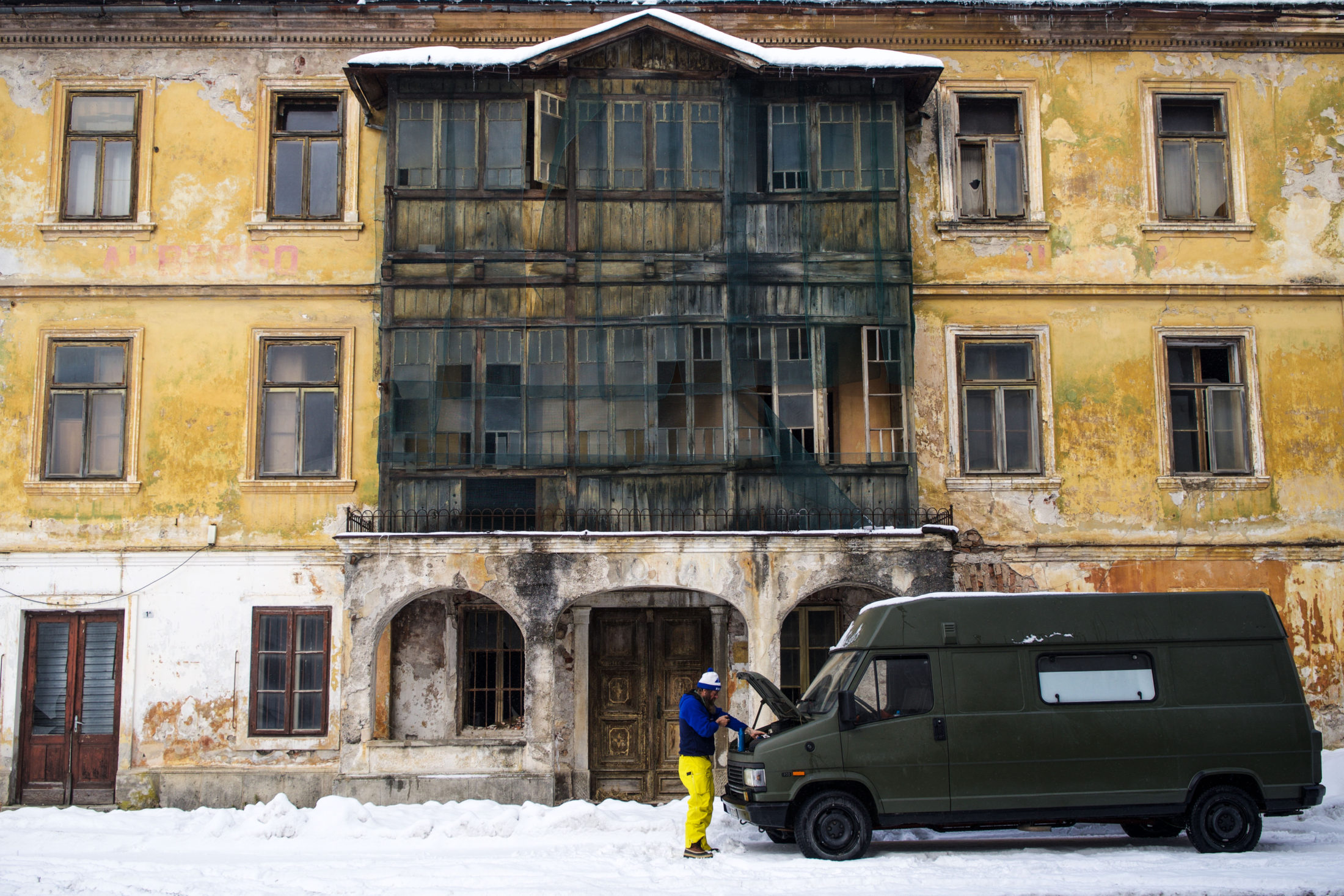 Andrea ((Andrea Polo, Editor’s Note) drove stylishly on a winding road edged with fresh snow. Our renewed acquaintance felt like the return of winter. He didn’t slow as we passed the long-deserted border post; and after passing through a charming little village or two we carried on up through a magnificent valley, to the very end of the road in the heart of this mountain wilderness.

Eager to try out the fresh snow that had fallen just the day before, we climbed through an obscure forest made still more impenetrable by the mist and fog. After we’d thrashed around to get through a combat zone of bushes growing uncontrolled in random thickets, we came out into a huge limestone corrie.

I was happy to find the snow came halfway up our calves; now and then I’d stick my pole in to check its density… Lost in meditation with the effort, I suddenly noticed that the clouds above us were starting to break up. It was like some adventure story: we ended our climb in full sunshine, around us a moving ocean of cloud, and rising out of it the tips of the highest peaks. Mose (Enrico Moseti, Editor’s Note) and Andreas were enjoying themselves naming the summits as they appeared and vanished again among the waves.

When we reached the top ridge we decided it wouldn’t be sensible to traverse the big snowbanks which the wind had heaped up below the summit.

I sat on a charming ridge and got some bread and cheese from my bag to share with my companions. As we ate our snack we felt strangely like shipwrecked sailors on a desert island. As soon as we felt the cold grow sharper we quickly put on our skis to start our bold descent. In fact only the first third of the corridor with its glorious walls of ice was above the cloud; after that we were plunged into a world of black, white and grey.

Following our upward footsteps and enjoying Mose’s joyous deviations, I was in ecstasies at every turn in this damp yet light snow, its elastic texture making it a pleasure to ski. Its consistency meant it stuck to trees and roofs, tracing out the contours of a soft, enchanting landscape.

A moment later we were sitting in front of a glass of not very good red wine while Layla commented on the photos of our day. My mind was at peace; I congratulated myself on my flair for sniffing out snow in this terrible time of dearth.

The map and the  iPhone

As often happens, the road ended in a snowy car park. This time we parked the van near the edge of a part-frozen lake and a children’s playground swallowed by snowdrifts.

Yesterday’s story played out again, and indeed became the recurring theme of our whole recuperative stay. We moved up through woods, then across a clearer zone still covered in clouds and mist.

Ask anyone who knows me: I’m no great fan of technology… So when I saw my friend Mose get out his mobile in a fog dense enough to put you off balance, I didn’t really think it the ideal time to check his likes on Instagram. What was my surprise when I found he had an app that would tell you your position and altitude to within a metre on a 1:25,000 scale map! I have to admit that what we lose in adventure and poetry we gain in time and safety.

Zeno (Zeno Cecon, Editor’s Note ) and Mose took turns to go first over the deep snow that produced a disconcerting echo between two Cyclopean cliffs. Time no longer had the same scale. We were learning to go slow, to be patient. There was a certain tenseness in the air; if we hadn’t been thoroughly familiar with this wet snow, we’d certainly have turned tail by now. Then the miracle happened once more, and after a belt of cloud we came out into the sunshine: our morale leapt up again. Zeno reminded us to curb our enthusiasm, and told us to keep our distance from each other as we traversed some impressive heaps of wind-blown snow. Layla, who has a very sharp sense of smell, remarked seriously: “It does stink a bit back there, though.”

Our confidence in the future had been rewarded, and we came up against an impressive overhang of limestone.

To climb a long corridor and end up against an overhang some tens of metres below a ridge you can’t see can, I admit, leave you with a feeling of less than complete achievement. However, the weather forecast offered no guarantees and this wasn’t really the place to relax; so we hurried to get into skiing mode. On this slope, in this snow, our fears took the back seat after just a few turns. It was an epic descent, punctuated by shouts of joy and happiness from our chests swollen with the pure energy in which this unspoilt place abounded. 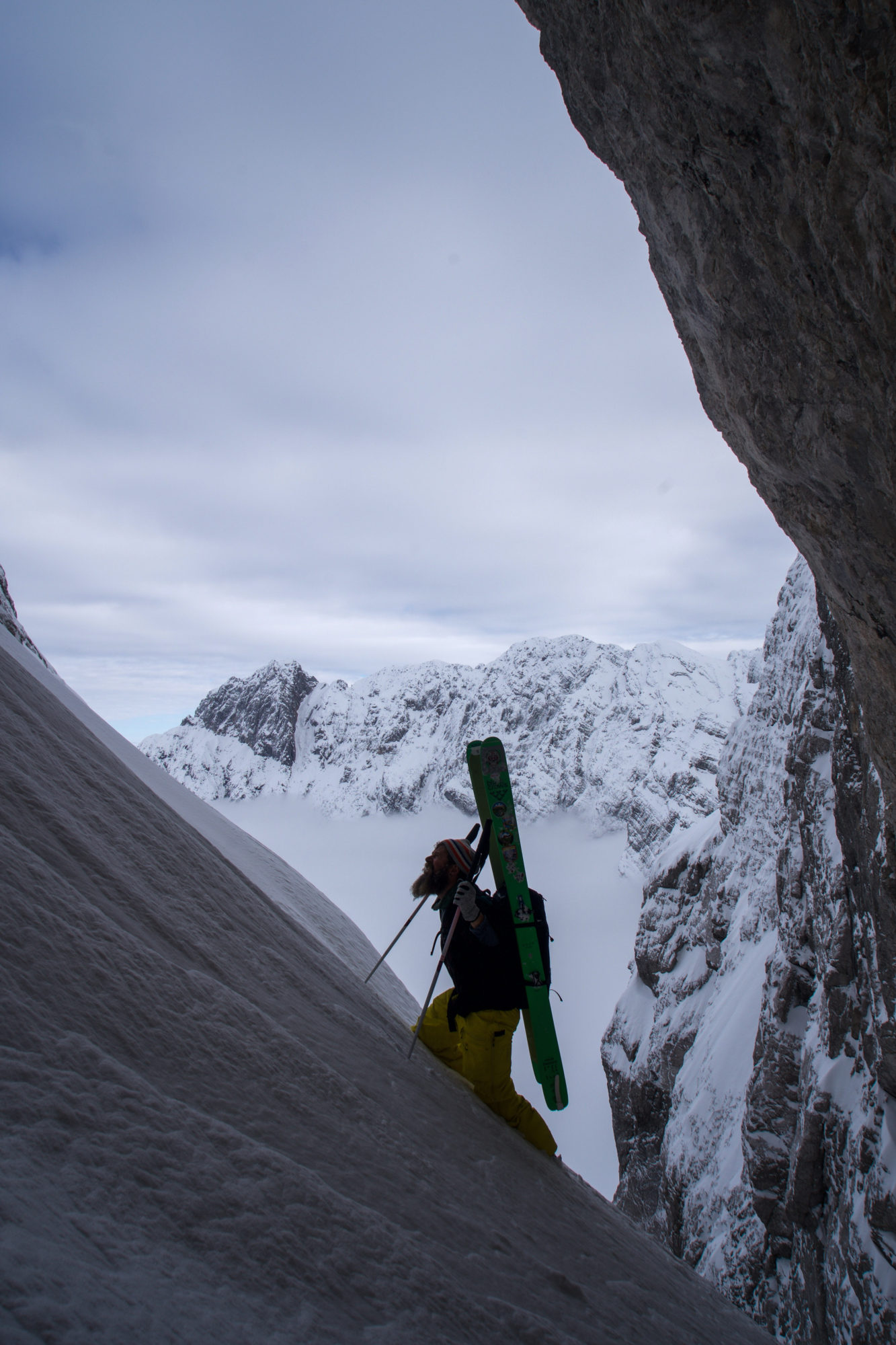 The path back to our vehicles was a merry wander through a delectably silent forest. As soon as we got down we were invited to go along with Enrico to a dance in the magnificent Celso Giberti refuge. We only got back late that night after dancing, singing and drinking to the devil-inspired sound of a wild and joyous band. An unforgettable evening.

We’d only gone for a few days, but we stayed more than a fortnight. At last it was time to leave this place, but we were determined to come back and explore the mountains of this forgotten massif. In total, we’d skied nearly a dozen magnificent corridors, met some genuine people and also – which is why this article is deliberately dated and outmoded in tone – had the impression of travelling back in time.

Enrico is a fine fellow who’s not afraid to show you the treasures of his secret garden, knowing that it will never be invaded by hordes of barbarians.

A very long time ago, when I was living in my old Bedford on the Basque coast, I woke one fine autumn morning to see some lovely little waves which promised a good day’s surfing. I was just enjoying my coffee when I noticed a small banger of a car with an unusual number plate. An individual emerged from it, looking fit for the gallows – or at least dishevelled, after a night in that none too comfortable-looking car.

My heart was moved for him, and I offered him a mug of my hot and stimulating brew, which he accepted with thanks. Neither of us was fluent enough in the language of Shakespeare, so we didn’t converse much; but we decided by common agreement to go surfing, something one can easily share without a great deal of talk.

Rok – for that was my friend’s name – was from Slovenia; and as soon as he found out I was a keen skier he gave me a map of his country and with a ballpoint carefully marked three peaks – amazing peaks, he insisted with many gestures.

Yesterday, turning out a cardboard box of maps and travel notes from quite a few years back … I found that old map. I opened it up to find the massif we’d been to on our last journey, and was surprised to see that the three peaks marked were all in that very massif where we’d been skiing. So I’m more disposed than I was to believe that old story which says our destiny is written on the back of one of the stones of this immense and very old temple in Budapest.