As you can see from the title, today was more about wandering than skiing.

Winter swinging with its tail (?)

It’s snowing since the begining of March… Currently, there is enough snow up in the mountains to do and to ski everything we want. About time, but better late than never.

From powder to hardpacked snow

Winter is finally here from February the 13th. It was snowing the whole night, so when we arrived on Vogel there was about 30-40 cm of fresh snow. FUNPOW all day long, wohoooo!!

Of course we had to be very cautious because of the avalanches, all the fresh snow was unstable…

Unfortunately I don’t have much photos or videos, because I forgot my camera at home. (yay)

It was an epic powder day with friends, which ended too soon. But hey, it’s still winter.

Ok, after a 2 day off, read that as teaching little kids skiing, it was time for pow again. Again it was snowing all day, so I called Peter if he wanna go skiing on Kobla…Initially he wasn’t impressed, Wierd.

But after I told him about snow situation he was quickly in the game. To Bohinjska Bistrica by bus and then with skis to the top. We were the first skiers this day so we had to make our own path.

Somewhere in the middle of the way there was already made a path from someone who went before us. That was great on one side because we were much faster but on the other hand, the path was so narrow that I could only put one ski in it. Later we saw why was that so… the guy had to go down in the same way he went up, because his skis weren’t made for powder..

At the top station of chairlift we decided to go and try a little bit higher, into the woods.. we were not disappointed. It was deep all the way through the woods…

In the open field Peter fall and lose a camera in the snow.. great I said to myself let’s start digging. We found it after half an hour, and then I decided to look how much snow is here… I know, I should do this in the start…

A great training day spent in the mountains… After that the temperature went up and it was raining 2000 meters above sea level (grrrr).

Next stop was Vrtača, for a change I wasn’t the playmaker, Simon Erjavec, a friend with the same passion to the winter as me, asked me if I want to join him in Sunday.

I think you already know the answer.. So let’s go.

We started walking at 5am, it was early but already warm (!?!) Soon we saw that we are to late for the sunrise at the top of Vrtaca, but the views were still amazing. We went up to the top of  Vrtača through Y couloir, where the snow was still soft, quite a challenge for climbing at some places, because I was waist-deep in snow. 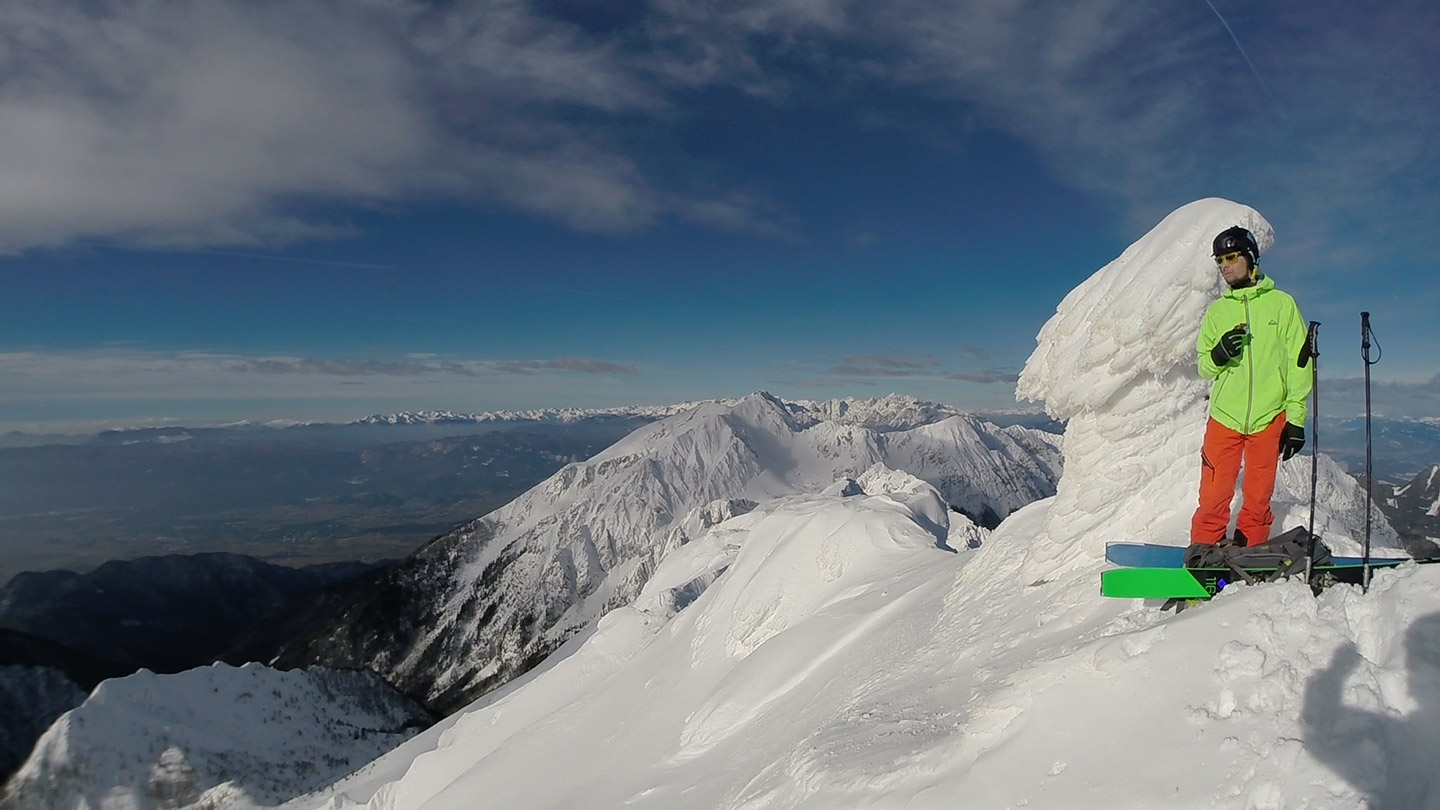 We reached the top after 2h an 30 minutes of walking/climbing. A lot of snow at the top but way to warm. Ok, at least the views were nice.

Skiing down was super fun as always, but at the bottom the snow was “violent” to the skier due to the high temperatures.

On the way back to the car we saw something amazing.. I’ve never seen so much people on Zelenica, crazy.

Yesterday the 24th of February me and Simon decided to go and check the conditions up there.. First we went to Viševnik and maybe later we will go somewhere else.. well that was the plan. But soon we saw that the snow is totally hard packed and frozen, yay. It was a challenge climbing to the top. And a little less when we skied down haha.

That’s it… now first a few days of rest and I’m already looking forward to the next week. Current weather forecast looks amazing…

As you can see from the title, today was more about wandering than skiing.

Winter swinging with its tail (?)

It’s snowing since the begining of March… Currently, there is enough snow up in the mountains to do and to ski everything we want. About time, but better late than never.